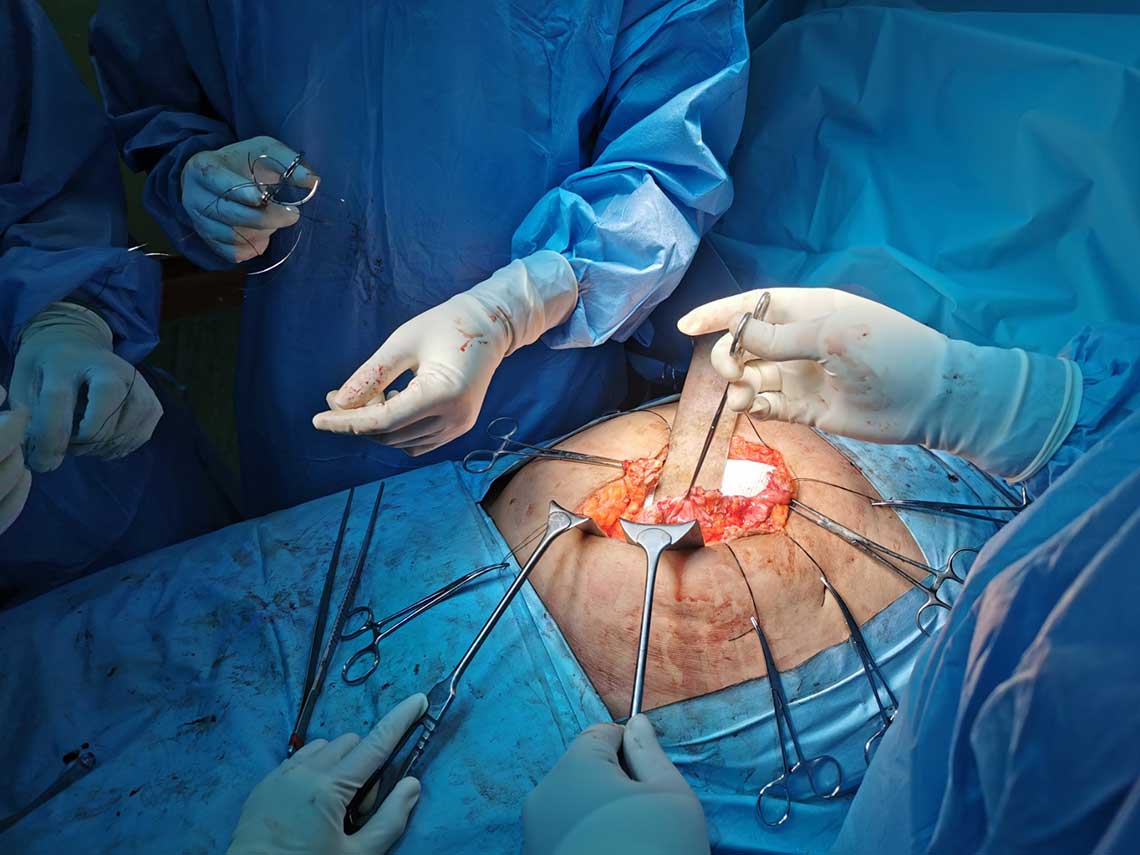 INTRODUCTION
The robot assisted laparoscopic radical prostatectomy (RARP) is well established as a safe and effective treatment for prostate cancer (1-4). However, patients undergoing RARP have an estimated risk of 7% to 21% (4,12) for developing an inguinal hernia following this procedure. Nilsson et al (9), investigated the incidence of inguinal hernia repair following RARP in national population data and demonstrated that there is approximately a four times increased risk of an inguinal hernia repair for patients that have undergone a RARP. Among the main risk factors for the development of inguinal hernias in these patients are age and previous hernia repair. It is speculated that the dissection of the preperitoneal space in the RARP can cause contraction of the transversalis fascia, increasing the size of the internal ring thus causing indirect inguinal hernias.

The repair of inguinal hernias during RARP has been published in several studies, which have demonstrated its effectiveness and safety (4,6,10,11). Overall, it has been observed that the hernioplasty adds on average, 12 to 15 minutes in total surgical time (4,6). No significant difference was found between RARP with or without concomitant hernioplasty, with respect to hospitalization or bleeding complications (11). This procedure can be performed both robotically or laparoscopically depending on patient and surgeon preference. The two methods used for the hernia repair are total extra-peritoneal screen placement (TEP), as well as, preperitoneal transabdominal screen insertion (TAPP).

This study analyzes a series of patients undergoing RARP, some of which underwent concomitant inguinal hernia repair.

Operative Technique
The RARP is undertaken using a six-port transperitoneal technique. An anterior approach is used to expose the prostate. This involves dissecting the space of Retzius, which allows the bladder to drop and the endopelvic fascia to be visualized. Once the endopelvic fascia is incised the dorsal venous complex (DVC) is ligated and a periurethral suspension stitch is then placed. Following this, dissection of the anterior and posterior bladder neck, mobilization of the seminal vesicles, and transection of the vas deferens occur. The nerve spare is then performed with a retrograde, athermal approach. A posterior reconstruction of the rhabdosphincter, using a 2-0 barbed monofilament suture, follows and is performed prior to the vesicourethral anastomosis. Once this is finished, the anastomosis is completed using a running double-armed 2-0 barbed monofilament suture. Following the anastomosis, an 18-Fr Foley catheter is inserted. The specimen is then removed through the supraumbilical trocar incision, all trocars are removed under direct visualization, and a Jackson-Pratt (JP) drain is placed into the pelvic gutter and brought through the abdominal wall at the left lateral trocar site.

If there is a concomitant inguinal hernia repair to be performed the same six ports used for the RARP are used for the hernia repair. The anatomic landmarks of the posterior inguinal region are dissected, before the extraction of the prostate. This dissection includes the epigastric vessels, vas deferent and spermatic vessels. Once the hernia defect is identified, its content reduced, and the defect closed, a polypropylene mesh with the minimum size of 15×10 cm is inserted and fixated with sutures to cooper’s ligament and the rectus/transversal muscles. The peritoneal flap is then closed with a running suture.

Pre and Post- Operative Management
Prior to surgery, a single intravenous dose of cefazolin or other appropriate antibiotic is administered within 30 minutes of the initial incision. The patient also receives 5000 U of subcutaneous heparin prior to the initial incision. Patients are started on a regular diet postoperatively and their activity is not limited. Most patients are discharged postoperative day one, once they are tolerating a diet and ambulating. JP drains are removed prior to discharge. The patients follow up in the clinic within 4-7 days for foley catheter removal.

Statistical Analysis
For statistical analysis, we used the matching technique of propensity scores for homogeneous groups with respect to demographics and comorbidities. Association of Chi-square test was used to compare between the two groups in terms of discrete variables, and t-test to compare the means of continuous variables. For all statistical analyzes, p <0.05 was considered statistically significant.

Base Features
The characteristics of the groups are shown in Tables 1 and 2.

The average age of patients undergoing the procedures was 61.65 years. The mean procedure time was approximately 120 minutes (min), with an additional period of 68 min for TAPP hernioplasty (mean = 188; p = 0.0001). BMI also showed a significant difference between the groups, averaging 28.3 kg / m² for the patients who underwent only RARP and 26.8 kg / m² for those who underwent the two procedures, RARP and IHR, concurrently (p = 0.028). The estimated blood loss averaged 110.87 mL, with no significant difference between groups (p = 0.371).
According to evaluations of race in this surgical cohort, approximately 88% of patients are Caucasian, 9% African American and the remaining comprised of several ethnicities. There were no statistically significant differences between the groups as far as outcomes are concerned.
Within the clinical stages, approximately 81% of patients were in stage T1c, while the second most frequent stage was T2a, with 13%. Stage T3a was observed in less than 2% of patients. There was no significant association between the clinical condition of the patient and the type of procedure (p = 0.35). Patients with stage T1c were the most prevalent in both groups of surgical groups.

Inguinal hernias and prostate cancer are two very prevalent conditions among men and have recently been found to have a relationship when dealing with surgical intervention. More specifically, there are some risk factors that have been established which relate the diagnosis of an inguinal hernia to RARP. These include older age, lower BMI, stenosis of the bladder neck and history of inguinal hernia (13).

The increased incidence of inguinal hernia after a prostatectomy was first described by Regan et al in 1996 (5). All of the most recent studies estimate that the incidence varies from 7% to 21% (4,12). This shows a significant increase in inguinal hernias when comparing patients under going RARP to the general population, which has a risk of being diagnosed with an inguinal hernia of about 5%. The prevelance of inguinal hernias and prostate cancer in the male population and the need for surgical intervention for both inherently leads to people questioning whether the two procedures can be preformed at the same time. This topic has been presented in the literature and doing concomitant procedures is widely accepted. In one particular study, Finley et al published a 40 case series of robotic inguinal hernia repairs (TAPP) with RARP and compared them to RARP alone. Overall, they found an increase in operative time by 10 minutes and no increase in complications within a follow-up of 15 months. In our study, postoperative complications did not differ between the groups, suggesting that the simultaneity of the two procedures performed does not increase morbidity for the patient. These data are consistent with the literature to date, which shows no increase in complications for patients undergoing the two procedures.

One inconsistency of our study when comparing it to the data presented in the literature, is that our surgical time was significantly higher. The increased surgical time can be attributed to the fact the General Surgeon performing the hernia repairs is not always immediately available secondary to being involved in other operations. The extra operating room time is time spent under anesthesia for the patient but it is not actual operating time. This extra time has not been analyzed specifically and is a limitation in our database and this study. We do believe that although our operative time was increased there are several factors that make performing both procedure at the same time optimal in our institution: postoperative complications were similar to those in the control group; the cost of a second surgical procedure would undoubtedly be higher; the hernia surgery being done at the same time as the prostatectomy provides the surgeon a privileged moment for the dissection of anatomical structures, considering the changes in the anatomy that can occur after previous procedures.

Celik et al performed a similar study in which all procedures were performed by the same surgeon. In this study, 20 patients undergoing laparoscopic radical prostatectomy and hernia repair were matched to 40 patients that received only the laparoscopic radical prostatectomy. No difference was found in the number of perioperative complications and although the surgical time was higher in the combined surgery, this increase was not significantly higher (14).

Another study compared the performance of 91 patients undergoing hernioplasty secondary to the incidental finding of hernias during RARP (cases) to 1118 patients who underwent RARP only (control). Cases were matched and surgical time was significantly higher in the group that underwent both surgeries (185 ± 28 minutes in cases vs 168 ± 31 minutes in controls (P <.001)). Operative bleeding was significantly lower in the cases when compared to the control group (70 ± 61 mL vs 194 in cases ± 82 mL in controls (P = .03)). There was also no significant difference in length of hospital stay and postoperative complications (15).

Similarly, another study with 1005 patients paired 29 patients with inguinal hernias that were found preoperatively and subsequently underwent joint surgery without the use of mesh to controls that only had RARP. In this study, there was no statistical difference in operative time, intraoperative bleeding, and complications (16).

If you take the results presented in our study and compare them to those obtained in the literature, our work differs in the fact that there are 39 cases of RARP associated with hernia repair and over a thousand cases of RARP, all of which were performed by the same surgeons. Although we have paired the groups in question a randomized study would do a lot to increase the level of evidence presented here.

This study compared two groups of patients undergoing inguinal hernia repair and robot-assisted laparoscopic prostatectomy. In our study, we demonstrated an increase in surgical time without increasing postoperative complications when combining the two procedures. From these data, we suggest that the performance of both procedures is feasible and safe. Even though this is not a randomized study, based on our data, it is still possible to report that performing the procedures concurrently is beneficial to the patient. This is due to the fact that the hernia repair is done in a privileged situation without the anatomical alterations of the abdominal wall and inguinal structures that may occur naturally after the completion of prostatectomy.

Because of the high prevalence of inguinal hernias in the postoperative period following RARP, we consider it advantageous to perform the two procedures at the same time. Overall, this will reduce the cost and inconvenience associated with performing two separate surgeries. After analyzing our data, we are optimistic about the benefits of doing both procedures at the same time but we realize that further controlled studies are necessary to confirm the results presented in this study.

Ethical approval:
All procedures performed in studies involving human participants were in accordance with the ethical standards of the institutional and/or national research committee and with the 1964 Helsinki declaration and its later amendments or comparable ethical standards.